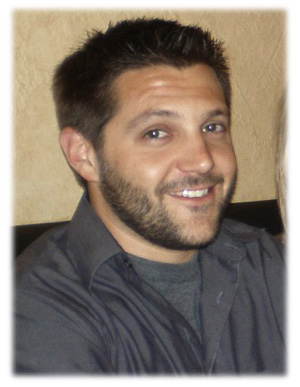 Jonathan Michael Fenlon was born on January 6,1983. He was the first grandchild on both sides of the family. He was spoiled quite a bit but loved a lot. He lived in Lake Orion, MI for 2 ½ years before moving to Waterford in 1985. He grew up in Waterford with his parents and 2 younger sisters, Jenny & Jessica. Jon graduated from Waterford Kettering High School in 2001, and attended Eastern Michigan University, where he graduated with his degree in Graphic Arts in 2007.

Following graduation from Eastern Michigan, Jon went to work as a graphic artist for a local company and also worked weekends at a local clothing chain. Jon also worked on several side projects, including a cookbook that shows some of his illustrating abilities.

Jon was always a big fan of sports, playing on various teams in soccer, baseball and hockey from youth leagues into adulthood. He started playing baseball & soccer at the young age of 7. His soccer team at Waterford Kettering, his junior year won the district championship. Besides soccer, Jon ran in marathons, played roller hockey, hiked, played disc golf and was always active doing something. He was very supportive of many local teams, including the Detroit Red Wings, Michigan Wolverines and the Detroit Tigers.

This love of sports led to one of the most exciting times in Jon’s life. While attending the fourth and deciding game of the American League Championship Series with his friends, Jon caught the walk-off homerun ball that was hit by Magglio Ordonez to propel the Detroit Tigers to the 2006 World Series. Jon was a local celebrity for a few days, appearing on the local news many times recounting this historic event.

Unfortunately, just 3 years later, Jon was on the local news again. On October 18, 2009, Jon completed the 13.1 mile run at the Detroit Free Press Marathon, but collapsed and died shortly after completion of his event. At age 26, he was the youngest of three people that died that day on the course.

On his Facebook page, Jon said about himself, “I fear that I want to do too many things for one lifetime”. Jon was here for much too short of time, but he lived life to the fullest while he was here. He left everyone that knew him with great memories of times spent together and made a profound difference in all of our lives. He touched each of us with his charm, charisma and his great sense of humor. Jon could raise the mood in a room just by walking into it. People loved to be around him.

Jon had a strong sense of family and friendship. He loved spending time with his parents and his 2 younger sisters, and also, with his countless number of friends. He is remembered by his family as a wonderful son, brother, grandson & nephew. He was a good role model for his 2 sisters, friends & family. His many friends remember him as someone who was genuine and caring. He enjoyed getting together with a large group or just hanging out one on one. Jon had the ability to make everyone his friend. He was a caring, compassionate young man who truly cared about people.

The annual golf outing in his name is a fitting tribute to Jon. This is the kind of thing that he would have loved to participate in. He always wanted to do something to benefit others, which is how the “Jon Fenlon Foundation” came about. Getting a group of friends together to have a good time, and honor someone that had suffered a tragedy, all while helping a good cause. We continue his legacy as a loving, caring and wonderful son, brother, grandson, nephew and friend by raising money each year to donate to local Michigan causes.

Jon will continue to live on in the hearts and memories of his friends and family. He had a wonderful life and we cannot begin to tell you about all of the memories that we have in a few short paragraphs. He made a lasting impression on all of us with his zest for life and his indelible spirit. This foundation is dedicated to carrying on the memory of a truly wonderful and very special young man. Jonathan Michael Fenlon will never be forgotten.

Your Shopping Can Make a Difference

Do your regular Amazon shopping at smile.amazon.com/ch/27-3350166 and Amazon donates to Jon Fenlon Foundation.